A Guide to Spooky Bristol

With Hallowe’en fast-approaching, what better way to get into the mood than visiting some of Bristol’s most haunted spots? From weeping nuns to malevolent highwaymen, Bristol is filled with sightings of ghouls and spectres, so we’ve drawn together the top 14 spots - how many do you dare to visit?

Dower House - aka ‘the big yellow house’ visible from the M32 approach into Bristol – is said to be haunted by the ghost of a young girl who died in a riding accident. In 1760, 17-year-old Elizabeth Somerset, Duchess of Beaufort fell from her horse and died due to a broken neck. Walkers through the estate have reported hearing a horse galloping around the grounds near the monument to commemorate her at the top of the hill.

Built in 1760, the Arnos Manor Hotel was originally a large private home. It had its own chapel run by nuns from a local school and legend has it that the place is haunted by the ghost of one of these nuns.

Apparently, one of the nuns fell pregnant and took her own life because of the shame. To conceal the scandal, the other nuns bricked her corpse up in an alcove, where she remained hidden until WWII when part of the building was damaged by a bomb. Builders making repairs discovered her remains - but rather than revealing them, they also hid them to save time and avoid awkward questions.

Her ghost is said to haunt the hotel, climbing stairs that don’t exist, softly calling out names, weeping and pressing down on guests' chests as they sleep. Most of the activity has been reported in room 160. 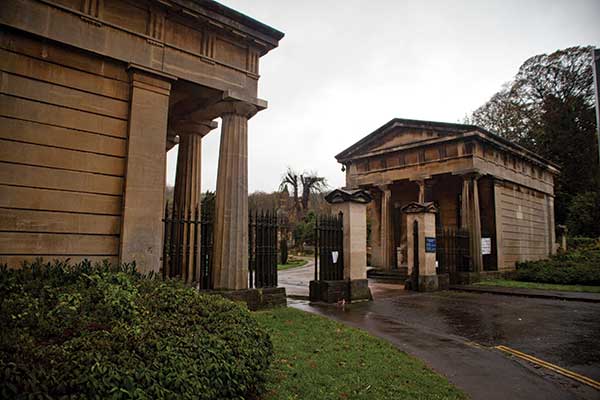 Also in the area is the beautiful Arnos Vale Cemetery. However, it’s also said to be haunted. There have been many reported sightings of two separate female ghosts - one crying over the death of her husband killed in action in WW1 and another hysterically crying due to having been buried alive - a mistake that was only discovered many years later when her body was exhumed. Although it’s a beautiful place for a walk, many visitors have reported feeling an overwhelming sense of sadness.

When the fire station first opened in 1975, there were many reports of strange goings-on - sightings of strange characters in the building. The station is built on the location of an ancient 12th Century Knights Templar garrison, which might explain why a fire controller saw the full figure of a knight descending the lobby stairs. 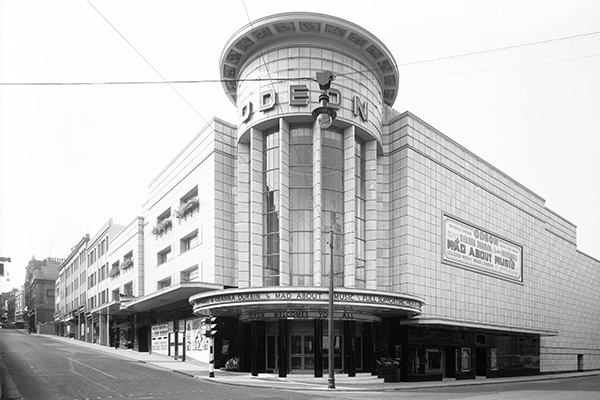 One of the most famously-haunted buildings in Bristol, visitors to the Odeon cinema in Broadmead get more than just a film with the entrance fee.

At around 6pm on May 29th 1946, the manager of the cinema was murdered in his office. During a screening of the Hollywood adaptation of Rudyard Kipling’s The Light That Failed, five shots were fired on-screen, followed by a sixth heard in the Odeon manager’s office. Screen 3 is next to the location of the murder and visitors have seen the manager appear in the third row and in the corridor leading to the entrance of the screen itself. There have also been reports of ‘cold spots’ and unexplained banging.

Once known as Gallow’s Acre Lane, there’s a very grisly story behind this leafy street. In the 1870s, the Downs was a dangerous place - pitch black at night and frequented by highwaymen. The most notorious was a Welshman named Jenkins Protheroe, who used to feign injury, then rob, and sometimes murder, those who stopped to help.

He was finally caught in 1873 and hanged on the site of his crimes at the top of Pembroke Road. His body was hung up in chains, covered in tar and left out to rot as a warning to others. Apparently, his ghost would climb down from the gallows and haunt the area until his body was finally buried - which it was, on the grass junction at the top of the road. 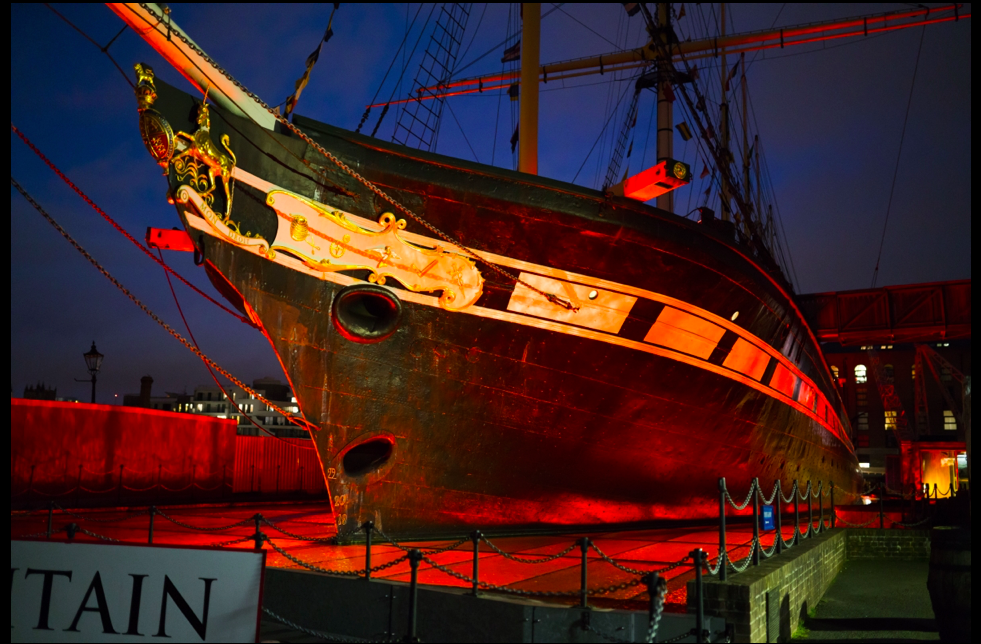 It’s perhaps unsurprising that this ship has a few ghost stories. The most famous is the tale of Captain John Grey, who disappeared one night after falling ill. It’s rumoured it was suicide - while others say he was murdered for all the gold stowed away in his cabin. However he died, there have been reports of the sound of hobnail boots as he walks across the deck, accompanied by sights and sounds of doors opening and closing, and self-playing pianos.

But there’s not just one - there’s the ghost of a young sailor who reportedly fell from the rigging, and also the haunting of tragic Mrs Cohen who died mysteriously on board a few weeks after her wedding.

For many years the owners reported feeling an unpleasant presence in the building. The ghost was said to be so malicious and angry that in the 1920s, someone once leapt from an upstairs window to escape it. 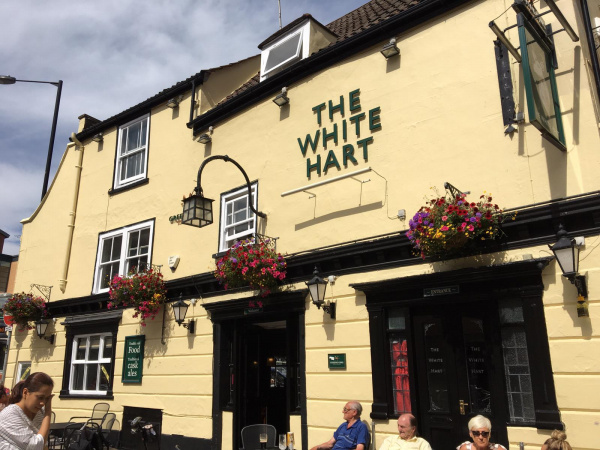 The White Hart pub was built in the 1600s, but parts of the building date back to 1174. It originally formed part of St James’ Priory but the chapel house was purchased by two brothers in the 1600's and converted to an Inn. Legend has it one of the brothers murdered the other to gain full ownership. The brother who was killed is said to haunt the building to this day and strange orbs have been witnessed on the pub's CCTV.

Built in the 12th century, All Saints Church is believed to be haunted by the spirit of a monk murdered by Henry VIII’s troops in the 16th century. He is believed to have protected the hidden valuables from the King’s troops - a treasure hoard that still hasn’t been found. There have been sightings of the ghost walking through the church talking to himself. 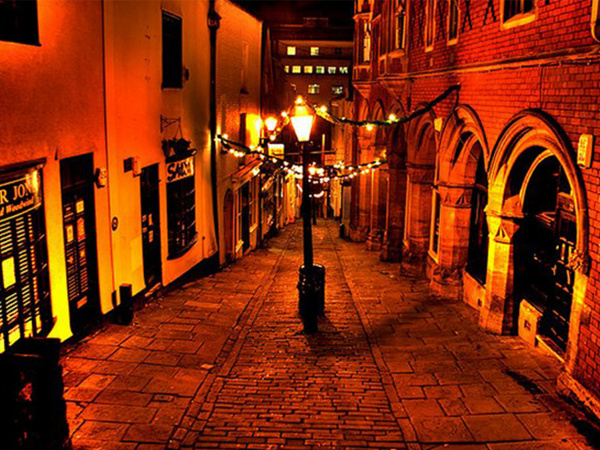 The Christmas Steps is a quaint and charming shopping street with a sinister past. Before it became a bustling art quarter, it was the original way up to the gallows at the top of St Michael’s Hill and people have reported hearing the screams of people being led to their deaths. There have also been reported sightings of the ghost of a young girl who is said to have drowned in the River Frome, which once came up to the foot of the street.

While the building itself dates from the 1740s, a building has stood on this site in Bristol’s medieval Old City since the 13th Century. One of the country’s oldest Coaching Inns, it has been host to figures like Elizabeth I and Oliver Cromwell - and now a number of spirits. Since 1973, there have been at least two sightings of a male apparition dressed in "an ordinary shirt and pair of trousers" in the cellar bar, a woman in white and that of a teenage girl with long dark hair by the main staircase. A tour visiting in 2007 witnessed the torso of a man standing in front of the open fireplace whilst they were enjoying a meal and there have also been sightings of a ghostly young girl. 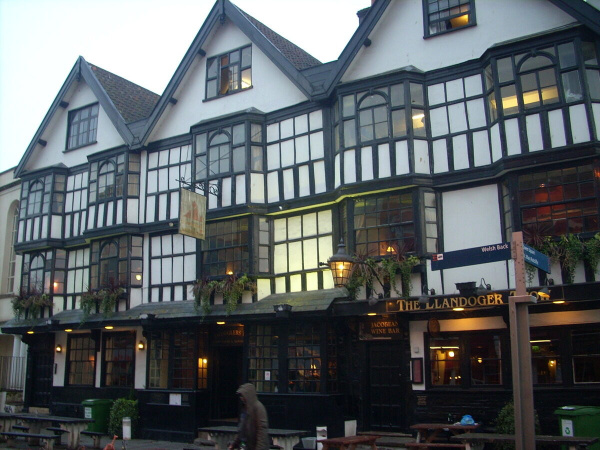 One of Bristol’s oldest pubs, the Llandoger Trow claims links to some famous works of literature: it’s claimed that it inspired both Robinson Crusoe by Daniel Defoe and Treasure Island by Robert Louis Stevenson. Rumour has it the pub is haunted by a ghastly fifteen ghosts, the most famous being a man with a metal plate on his leg. Many people have reported hearing the step-drag-stepping sound he makes as he walks around the old pub.

Famous for being the country’s longest continuously running theatre, it’s no surprise that the Bristol Old Vic is also said to be haunted. But this is a less malevolent haunting - the ghost here is said to be ex-Theatre Manager Sarah McCreadie, who worked there over two hundred years ago. She’s said to haunt the front-of-house area and sightings of her have often been accompanied by the smell of lavender.

For an even spookier October, take a look at our What's On Blog so you can make the most of autumn in bristol! Plus, when you stay at Clifton Hotels for two nights or more mid-week this autumn, you'll get 10% off your stay! Now that's a scarily-good discount! Find more details and book your visit here.